As we get close to foaling time breeders should refresh their knowledge of a normal foaling and when to call the vet.  The majority of foalings will occur without complication, however approximately 1 in 20 foals will experience some difficulty and it is imperative for both the mare and foal’s survival that assistance is provided immediately. Therefore, it is strongly recommended that all foalings are attended by an experienced foaling down assistant that can identify and correct malpositioned/malpresented foals. The best option is often to send the mare to an experienced stud farm to foal down. In addition, the vast majority of foalings will occur through the night so it will relieve many sleepless nights of foal watch.

Mare’s generally have an 11 month gestation, however ‘normal’ can range from 320-370 days so it is important to closely monitor the mare in the final months. Signs of impending foaling can include: behavioural changes, lying down, waxing up at the teats, softening of the ligaments at the tail head, an elongated vulva and an increased body temperature. However, some mares (especially maidens) can show none of these signs.

A normal labour will have three stages and the timing is very important. If the mare does not progress within the specified time a vet should be notified immediately. 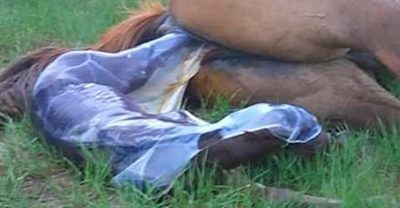 Ensure the foal’s head is free from the amniotic sac to prevent suffocation. The foal should be standing within 1 hour and suckling from the mare within 2 hours. The meconium (foals first black manure) should be passed by 12 hours of life. If manure has not been passed the foal will often be seen straining or tail flagging and may require an enema. Monitor the mare for signs of depression, colic, retained foetal membranes or prolapse of tissue outside the vulva. Call a veterinarian if any of these problems arise.

To discuss your mare’s upcoming foaling contact one of our experienced veterinarians at Newcastle Equine Centre on 4927 6135.