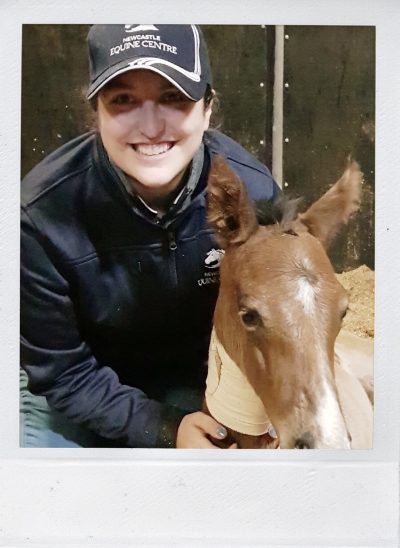 Neonatal maladjustment syndrome (aka dummy foal syndrome) is a common disorder of foals that have mystified equine veterinarians for decades. Foals affected by this disorder seem detached from the world, often wondering aimlessly with no affinity for their mum. The most problematic symptom of this disorder is these foals’ lack of desire to nurse, so they can get very weak and sick if not treated appropriately.

Causes for this disorder have been speculated for years, however great advances have been made in recent years by Dr John Madigan and his research team at the University of California (Davis). They’ve pinpointed a group of neurosteroids that are naturally elevated in foals in utero to keep them quiet and in a sleep-like state while in development. When the foal is born, it is thought the pressure from the birth canal signals these neurosteroids to decrease and trigger the foal to “wake up”. In foals affected by neonatal maladjustment syndrome, these neurosteroids remain elevated even after birth.

Dr Madigan and his team speculated that by replicating the pressure from the birth canal, they could stimulate the neurosteroids to decrease and trigger the foal to “wake up”. They came up with the “Madigan Squeeze Technique” which essentially squeezes a foal to simulate going through the birth canal.

Recently, our internal medicine team at NEC was presented with a foal showing classic signs of neonatal maladjustment syndrome (very detached, no desire to nurse) and was becoming very weak as a result. A nasogastric tube was placed so the foal could be tube fed and he was started on broad spectrum antimicrobials to protect him from infection since he had not received the essential colostrum from its mum. Once the foal was stabilized, the Madigan Squeeze Technique was performed:

The foal remained in the squeeze position for 20 minutes, then woke up as the squeeze was released, within 2 hours of the squeeze technique being performed the foal was suddenly very bright with a strong affinity for its mum, and nursing!

Once the foal was nursing normally, other treatments were gradually discontinued and he went home as strong, healthy foal. Before the Madigan Squeeze Technique we would have been forced to wait for the foal to “wake up” which could have taken days, prolonging hospitalization and the risk for complications. Instead this foal was able to wake up within a few hours!

The Madigan Squeeze Technique is now an invaluable tool, however is only appropriate for foals diagnosed with neonatal maladjustment syndrome. Foals can be affected by a variety of disorders that can easily be confused with this syndrome. If you think your foal may be suffering from neonatal maladjustment syndrome it is very important to seek veterinary attention as your foal will require treatment and diagnostics to confirm the disease and prevent your foal from suffering from secondary complications (weakness, sepsis or infection).

Please don’t hesitate to reach out if you have any questions about your foal or the Madigan Squeeze Technique!